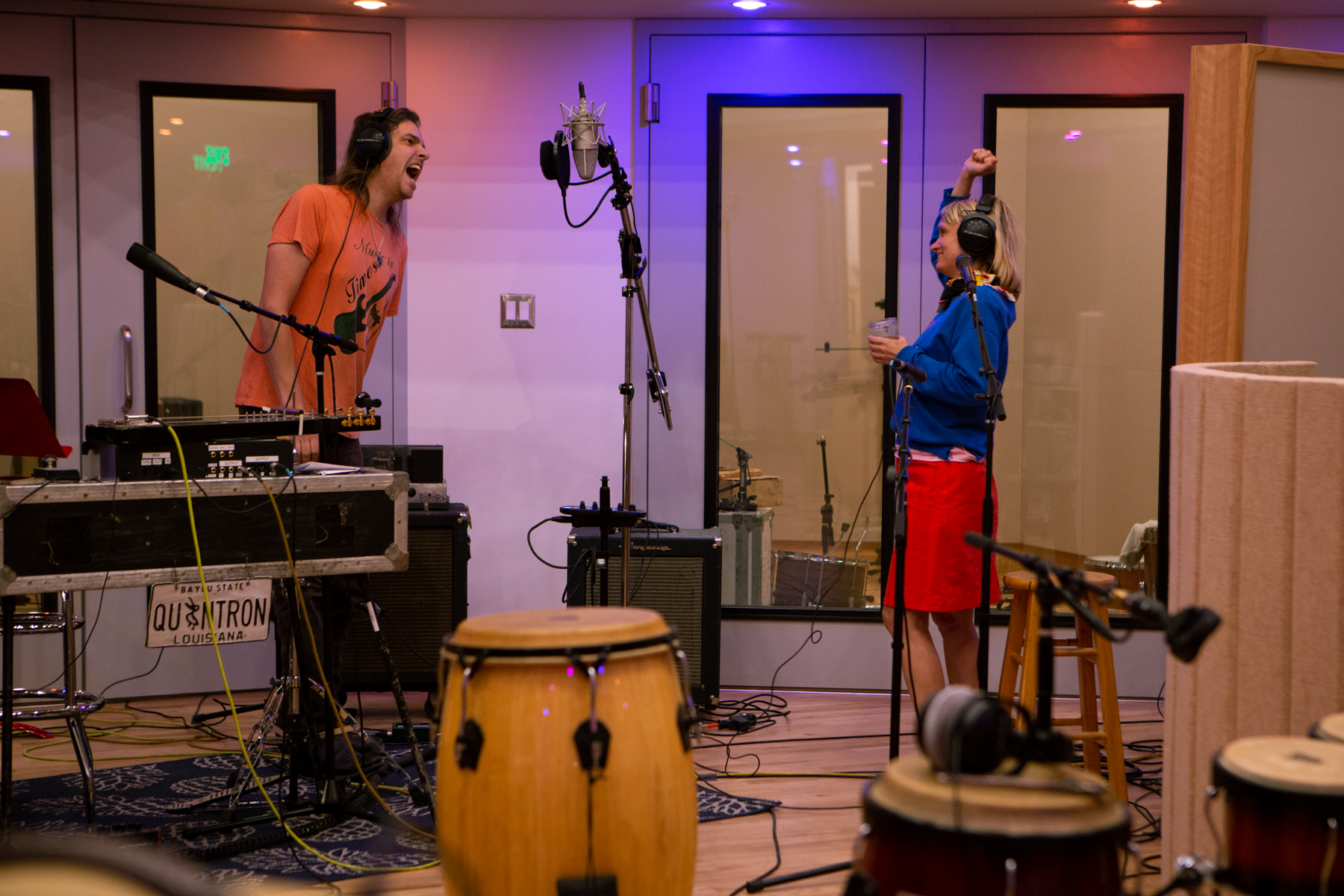 Pulp Arts had the pleasure of hosting the iconic underground duo of Quintron and Miss PussyCat as part of our 2019 residency series. The pair are diy to the core, known for raucous live shows that blur the line between unbridled rock n’ roll and the wonderfully weird world of puppetry. Their sound is tied to roaring organ tones and the unique sonic character that emerges from Quintron’s handmade instruments, most notably the photovoltaic drum machine, the Drum Buddy. Danny Clifton and I spoke with Quintron just before the holidays to dig into the process and  gear used in the recording of Goblin Alert, their first studio album since 2011’s Sucre Du Sauvage.

Goblin Alert was a major shift in direction for you as it was recorded with a full band. But as a certified gear nerd, I have to start this interview by asking about the Drum Buddy. You mentioned briefly that you were working with an updated model for the sessions at Pulp. Where did the idea for the Drum Buddy come from and how has it evolved over the years?‍
‍

I began messing with light sensor activation for audio in the mid to late 90s. I started off as a drummer, I was building stand up kits that had contact mics on every drum. These mics would activate a light inside of a darkened box that would go on to charge a CVS cell that would trigger a tuned oscillator.

I soon switched to playing the organ and continued to develop a one-man-band setup knowing that I wanted an electronic element. I knew i needed to trigger it with my right hand while my left hand would play bass lines. Meanwhile, I was becoming super inspired by the world of turntablism. I loved  DJ Qbert and the rawness of the battle scene that was developing. I never got into it myself, but I wanted my drum machine to work in a similar way that allowed you to spin and scratch the rhythms and also allowed you to use both hands.

After that initial experimentation the first real prototype was developed in 1999 and is started to gain a following after I made an infomercial for it. That idea was kind of a joke, but I really do love infomercials and the art form of commercial making.

But, once you build something you see all the problems with it. So I continued to make changes through the years improving the sound and moving the switches that make the Drum Buddy easier to play on stage. The Drum Buddy we used on the Goblin Alert sessions happens to be the Mk 5 edition. The big improvement in this one is the addition of a white noise trigger.

Drum machines through the ages have used white noise to emulate high hats. There’s nothing better than an old Wurlitzer Organ white noise high hat. It’s just so soft and squishy and triggering it with light only makes it better.

Light triggers have a certain sound and distinct envelope, right?‍

Yeah, I use CVS photoresistors and every one is unique and rated differently. I have to get them in surplus because they’re getting hard to find, so I’ve been hoarding them for years now. The beautiful thing about them is that you have to handpick them and tune the circuit to the cvs cell to get the right envelope for the sound you’re going for.‍

How was working with a full band on this album?‍

After 20 years of playing to a drum machine, working with a drummer like Sam is like breathing oxygen for the first time. He's imitating a drum machine and not doing a ton of fills, but the little nuances he adds allows the music to come alive.

Danny added more groove on bass and guitar. It allowed me to concentrate more on being a singer and organ player. It made everything easier and added something fresh to each take.

Benny is an old buddy of mine who has played in a ton of bands with me in the past. He’s one of those annoying musicians that are amazing at everything.  We organized our sessions, so he could track some awesome synth and talkbox parts while he had some gigs in Florida when we were recording. His solo music is rad if you haven’t checked it out. It sounds like John Carpenter soundtrack with a vocoder comedian on top.

Overall, the process was great and I’m hooked on it. Music is made in a million different ways, but the purpose of playing in a band is to communicate with those people and ride the wave. The studio made live tracking painless and we were able to rig things without having to deal with audio bleeding onto other tracks.‍

You juggle a ton of instruments in your live show and it seemed like you brought a similar workflow to Pulp. I recall seeing a mellotron, the lap steel guitar, organ, rhodes, and drum buddy as your primary rig. Am I missing anything? Does your songwriting process revolve around this level of multitasking?‍

Yeah, It comes in all different ways, but the best is when I have lyrics first, honestly. That helps me structure things and build rhythms around words, but it’s often not like that.

My instruments are there all the time, but I usually start with a beat from my drum machine and start building things up with a bass line with my rhodes. The lap steel is the newest addition to the rig even though I’ve been banging on it for years at this point. I just start exploring my palate of sounds and see where it takes me.

You’ve been working these songs on the road for some time, right?‍

Yeah,  I wanted to wait a really long time before recording the next proper Quintron and Miss Pussycat record. I didn’t want to rush into making another record and not know if the songs would work in front of an audience.

I picked the best songs that worked on tour after having lived inside those houses, but throwing Sam & Danny in added fresh energy and it gave it the sense that we were playing the songs for the first time.‍

The lap steel guitar tones in particular sounded really rad. Do you remember which amp you were using? ‍

Yeah, we used the studio’s old Fender Tweed Princeton. It’s super small and had two knobs and was complete magic. I don’t know how to explain it, but somehow it just made playing easier. I  need to find one of my own because I’m using something similar to get that break up sound, but it’s way more prone to feedback.

The Princeton is the absolute shit for a drum stick lap steel guitar!

Goblin Alert was the first album recorded entirely to tape at Pulp. That natural saturation complements your sound. How has your recording philosophy evolved over the years?‍

Greg Cartwright, our producer,  sold me on going to tape. He said, “No man, there’s something that tape does to drums and cymbals in particular that mixes the sound for you. Until you do it, you won’t know how much of a difference that tape makes.”

Tape really smooths out the transients and glues stuff together. It does so much of the work for you, especially with compression. In the digital mixes we typically work with, we’re always trying to glue disparate parts together, but working with tape, it’s all just there.‍

I’m a big fan of room sound and it solves a lot of your problems in mixing.  Sometimes when players aren’t in the same room the drummer and guitar player will sound like they’re on different planets and you can go down an endless plug-in hole trying to fix that.

Winston and Greg were great about capturing the room sounds recording in the same and making decisions in the moment. He always wanted to make it sound like a record right now.  ‍

We definitely align on that. I  don’t like a lot of choices. Sometimes, when you’re recording all in the box, you can get lost and the audio starts looking like a bunch of fuzzy worms after you stare at it for too long.‍

Were there any particular microphones or outboard gear that defined the tone of the record?‍

I’m not a big gear guy, but I’m really picky about the mics and placement on the Leslie speaker. I’ve been involved with way too many sessions where people do it wrong and I didn’t want to experiment.  A Leslie mic’d too close sounds like a helicopter landing on your face. So we used Sennheiser 421’s on the bottom and Danny picked the Beyerdynamic M 160’s on the top. You have to be careful, but Ribbons can take off the harsh high end.‍

We used the Neumann M149 on almost all the vocals and we ended up using the cool vocal sound that we got from your old PA.‍

Yeah, the Shure Vocal Master makes for a great effect and it looks like something the Rolling Stones would use in 66. Winston mixed it in really well. I’m really happy you guys convinced me to use a dry mic as well.

I do have to shout out the Pulteq Eq’s. What a problem solver! It appeals to me with its limited options and it’s hard to overdo it. Every signal we ran through it came out sounding better.

I like that it forces you to listen and doesn’t have visual feedback beyond the knobs. Digital Plugins and Eqs can force you too focused on the visual elements instead of just hearing the music.

Traditional gigging seems to be off the table for at least another 6 months. Are you working on any new instrument designs or installations?  ‍

I like buddies… I’m into making my own friends. I recently put out the Bath Buddy. This solves the problem of people with low water pressure and you don’t want to sit around and wait for it. You can make a sandwich, check your email, and not waste water saving the planet.

I built it because Panacea would let the Bathwater run too long and our water bills were going crazy. Then I made one for Sam and we found it started making a difference. So I made a bunch as a way to make some cash during the no-gig times.

I’m also working on the Yoga Buddy right now. It’s a take on the Weather Warlock and will be a drone machine that uses the weather and wind to make sound, but I’m working with a Yoga Instructor to capture her movements. I'm hoping to utilize the pressure on her Yoga mat to alter the chordal relationships of the drone. I’m not too deep into it, but I do have some ideas in the works for it.

As far as shows go, I’m about to do a 3 day drive to Joshua tree for a Weather Warlock for Rogue Routes. It’s a drive-in car gig at the Sky's the Limit Observatory that’s a science presentation as much as it is a concert. I’ll be doing a few performances and some demonstrations of the Warlock on a wild bill. It’s me, the GZA from Wu- Tang, and a scientist from Nasa. Should be cool!