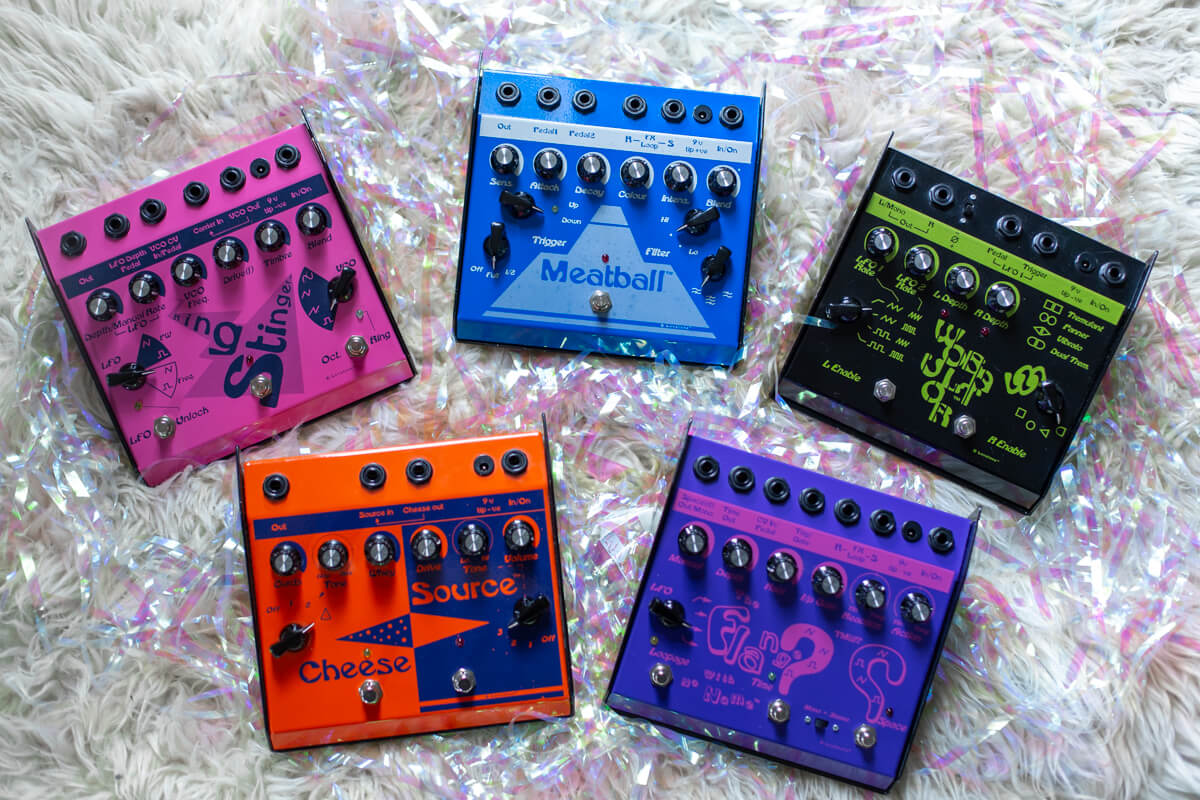 Crafting tones that are uniquely your own can be one of the most satisfying parts of the recording process. The team at Pulp Arts is dedicated to providing you with the tools and expertise to get you the sounds you’ve been dreaming of (and perhaps a few you may not have considered).

Our collection of Lovetone pedals are some of our favorite tools to take sonic alchemy to the next level. These rare and much-revered pedals are most commonly associated with huge and somewhat unconventional fuzz sounds. Lovetones have been used on stage and in the studio by the likes of Radiohead, My Bloody Valentine, Sonic Youth, Beastie Boys, The Edge, Wilco, Bootsy Collins, Oasis, and Metallica. You can definitely see and hear Lovetone’s lasting legacy and design philosophy on the booming guitar pedal industry in contemporary manufacturers like Chase Bliss Audio, JHS, Catalinbread, and Death By Audio to name a few. In this post, we’re digging into the history and some common applications of these incredible effects. ‍

Lovetone was a small British company founded by Vlad Naslas and Daniel Coggins in the ‘90s and 2000s. Their large format pedals were decades ahead of the current modular synthesizer resurgence employing LFOs, expression pedals, or control voltage to control multiple parameters within their effects. This level of flexibility and all-analog signal path gives the user the ability to create extremely unusual and personal sounds.
‍

While Lovetone stopped producing new pedals in 2001, Coggins quietly continued pedal design and Lovetone repairs under the guise of Dinosaural through 2009. These days he can still be found consulting on circuitry design with Thorpy FX and can be contacted via his Cogginsaudio website.‍

Lovetone’s Big Cheese pedal may be their most iconic and it’s also one of our most reached for fuzz pedals. It features a versatile silicon transistor-based circuit that has four distinct modes to alter your sound. They include a tone bypass, mid-scoop, mid-boost and a Swiss setting that gates the fuzz, yielding the beloved velcro-like growl. It was recently cloned by JHS as the Cheese Ball.

The Cheese Source pedal takes things even further by combining the circuitry of the Big Cheese with Lovetone’s Brown Source overdrive schematic to give you two gnarly flavors of drive on tap. You can even run the Brown Source and Big Cheese circuits independently via separate outs if a multi-amp set up is part of your live or recording rig.

Ring modulation can be a polarizing effect as this technique can yield atonal and unconventional sounds, so if you’re looking to get far out then the Ring Stinger will certainly not disappoint.

What is Ring Modulation?

Ring modulation is a form of amplitude modulation that occurs when two signals are multiplied, generally a simple waveform like a sine wave and a carrier wave. This process creates two brand new frequencies which are the sum and difference of the input frequencies. The resulting sounds are brash, robotic, and bell-like due to the complex waveforms created, which are often not harmonically related.

This effect can be subdued by consciously tuning the carrier frequencies to the key of the music you're working in or by altering the speed of the carrier frequency to create more of a conventional sounding tremolo effect. Ring modulation is generally thought of as a guitar or bass effect, but one of the most famous applications of the Ring Stinger was on the truly alien-sounding vocals of Radiohead’s Thom York on the title track from Kid A.

The Ring Stinger affords access to modulate the carrier wave directly with control voltage. This can be done with external synthesizers like a Moog Voyager or with audio. Running drum machines into the carrier frequencies input yields particularly cool results!

The Meatball was Lovetone’s best selling effect and can be classified as an envelope following filter pedal. The sound is similar to a wah-wah, but the effect responds directly to the dynamics of your playing. Hitting your strings harder will open the filter more widely. Similarly, a more delicate approach will yield a more subtle effect.  Envelope followers are most commonly employed in Funk and are loved by bassists and guitarists alike, but the Meatball’s most notable use in a track is probably Kirk Hammet’s Filter Sweeps on the track “I Disappear”. That said, it’s also been spotted as a modulation source on My Bloody Valentine’s Kevin Shields’ pedalboard at live shows and in the studio of Fat Boy Slim.

The Flange with No Name

The Lovetone '? (Flange with No Name)' is a multi-function time-based effect that excels at flange and stereo modulations. That said, in many ways this box is also a simple analog synthesizer. The ? flange is a truly innovative approach to a common effect and can do everything from subtle tape inspired flange tones to severe self-oscillations at the twist of a knob. The wormhole gets deeper when you begin to utilize the pedal’s effects loop. This feature allows you to lend entirely new colors to your favorite external pedals and works particularly well with delays.

While more subdued effects are possible with the ?™ we think it’s best to get weird this one and do your best to communicate with whales through the textures you emit when plugging this one in.  This pedal was the last original design produced under the Lovetone brand.

In my opinion, the unsung hero in the Love Tone pedal collection is the

Wobulator dual optical tremolo and stereo panner pedal. Independent tremolos for the left and right outputs allow the user to create wide stereo images that impart a ton of motion onto whatever sound they run through their pedal. The Wobulator is capable of everything from the fast volume modulations heard in spaghetti western soundtracks to full-on ambient swells. It even has a solid vibrato setting if you want to add pitch modulation into the mix.  Highly recommended for stereo amp rigs and for dialing in the atmospheres at the end of your session! Al Doyle from LCD Soundsystem and Hot Chip has been known to rock a Wobulator.

As a chronic sufferer of GAS (gear acquisition syndrome), I can tell you that pedals generally don’t write songs for you, but they will definitely inspire your creative process and take you to new places. The engineers at Pulp know how to coax the best sounds out of our gear and will save you some time in the endless pursuit of perfect tones for your next song. Give us a call at (352) 505-3620 or email us at hello@pulparts.com to get in the studio.