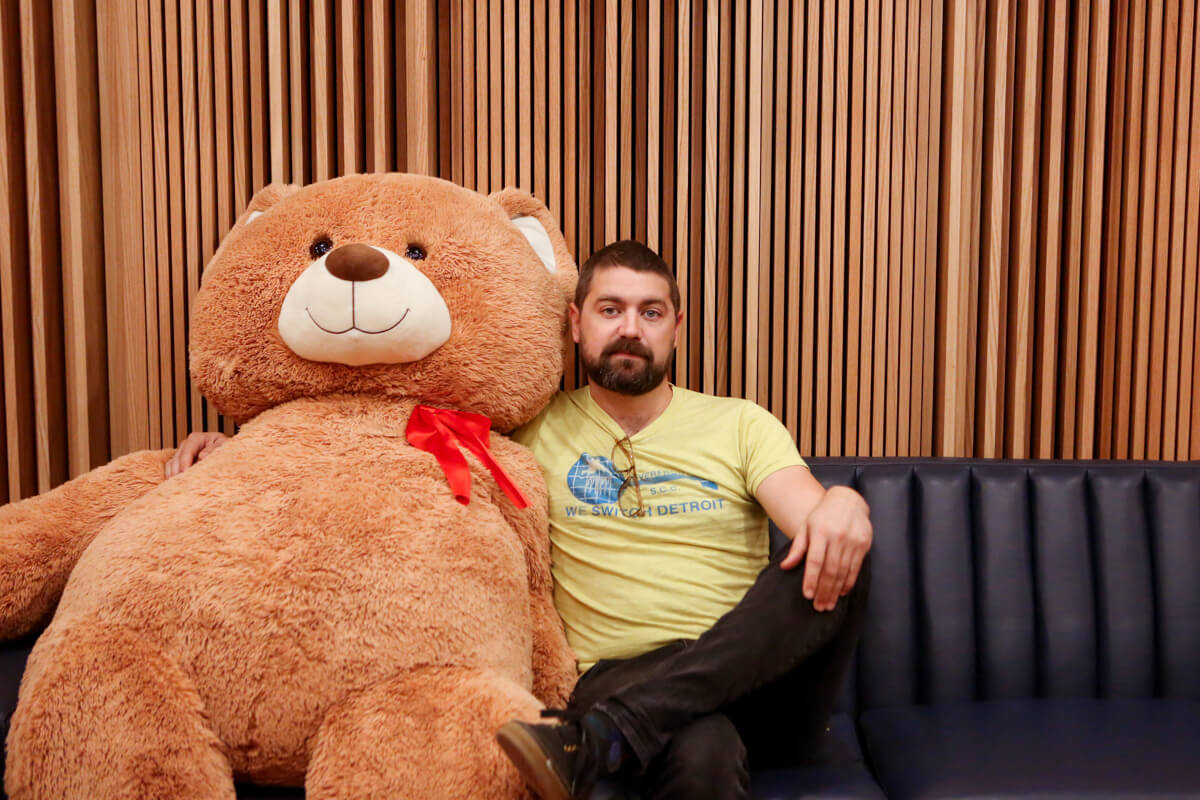 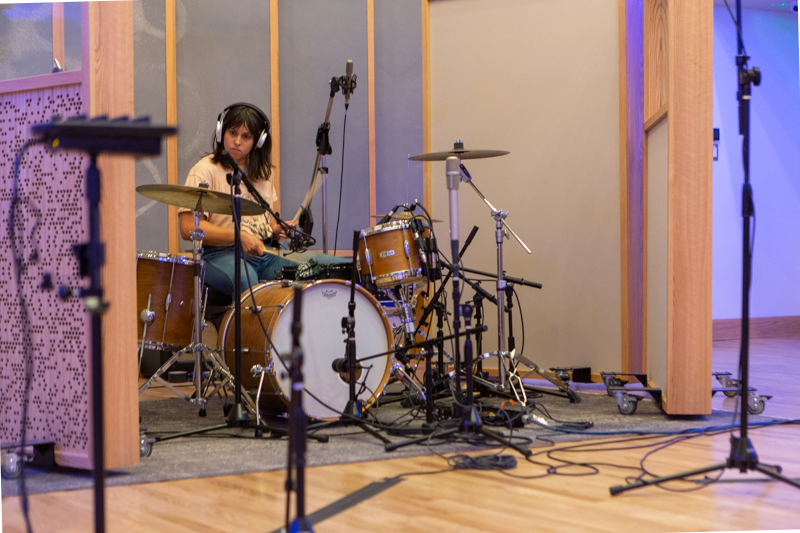 Behind the Boards 1: Winston

In our first installment of Behind the Boards, Pulp Engineer Winston Goertz Giffen reflects on his sessions with the band Smiley and describes a few of the unconventional techniques that brought the sound of our A room into their record.

When tracking Smiley, I decided to try a couple of different things with the room mics on the drums.  In the center of the live room about 10 ft. in front of the drum kit, I made an equilateral triangle with two Earthworks QTC-50s (placed approximately 5mm from the floor to gain the advantage of the boundary effect) with the third vertex being a Shure Beta 58 placed above and between the other two mics and pointed the opposite direction with the polarity flipped. I’ve used the Beta 58 merely as a talkback mic plenty of times and I’ve gotten in the habit of recording it as a room mic since it’s already up. It adds a non-harsh roominess to the snare and cymbals that I’ve grown to like.
Pointing the 58 away from the kit ensures that the drums are in the null spot of the mic’s cardioid pickup pattern, so it’s primarily picking up more diffused room reflections, while flipping the polarity maintains its phase relationship to the QTC-50s. My thinking was that having those three mics aligned on a vertical plane in the center of the room perpendicular to the drum kit would give me options to create a nice balance between the more direct stereo omni pair of QTCs, and the mono, less direct Beta 58.  Also, per Steve Albini, when mixing I delayed the room mics 10-20 ms or so to add another dimension to the drums (the Haas effect), sometimes only for certain parts of the song. 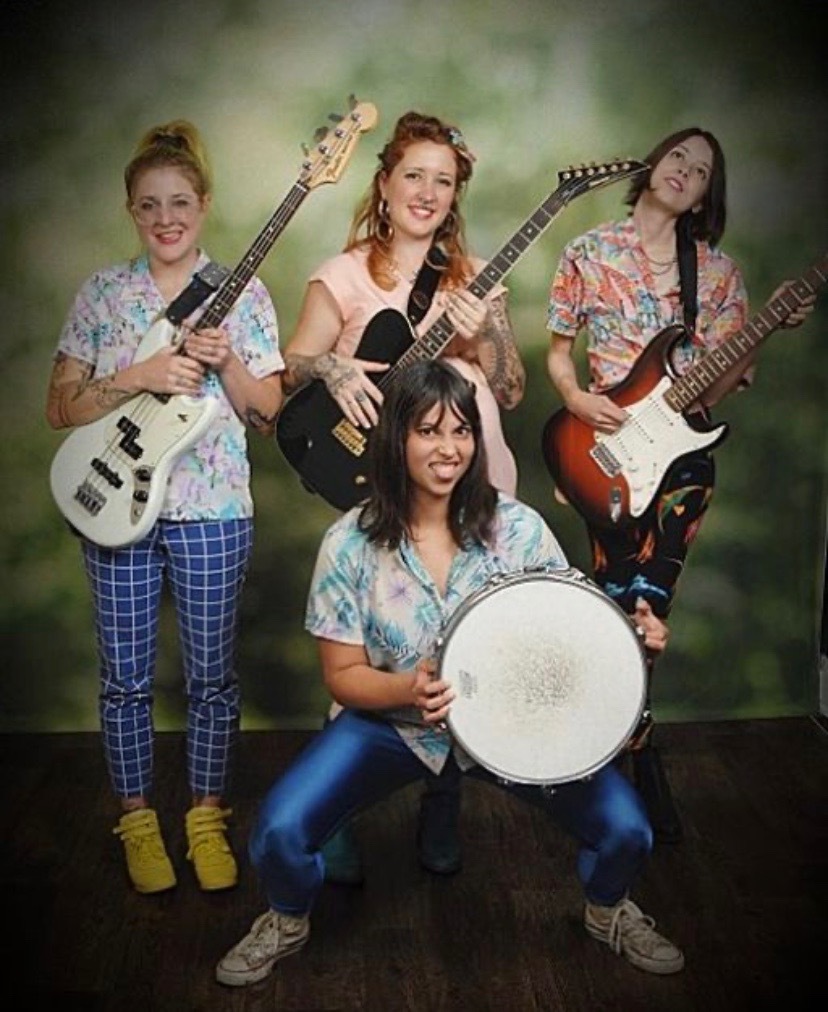 Towards the end of the session, the band wanted to record some improvised pieces, which turned out fantastic and actually ended up becoming prominent additions to the album.  For one of Becca’s drum improvisations, I attached the QTC-50s to a Jecklin Disc and physically spun around in circles in front of the drum set, creating a bizarre panning effect.

We want to work with you! Send us an email at hello@pulparts.com if you would like to find out more about recording at Pulp Arts. 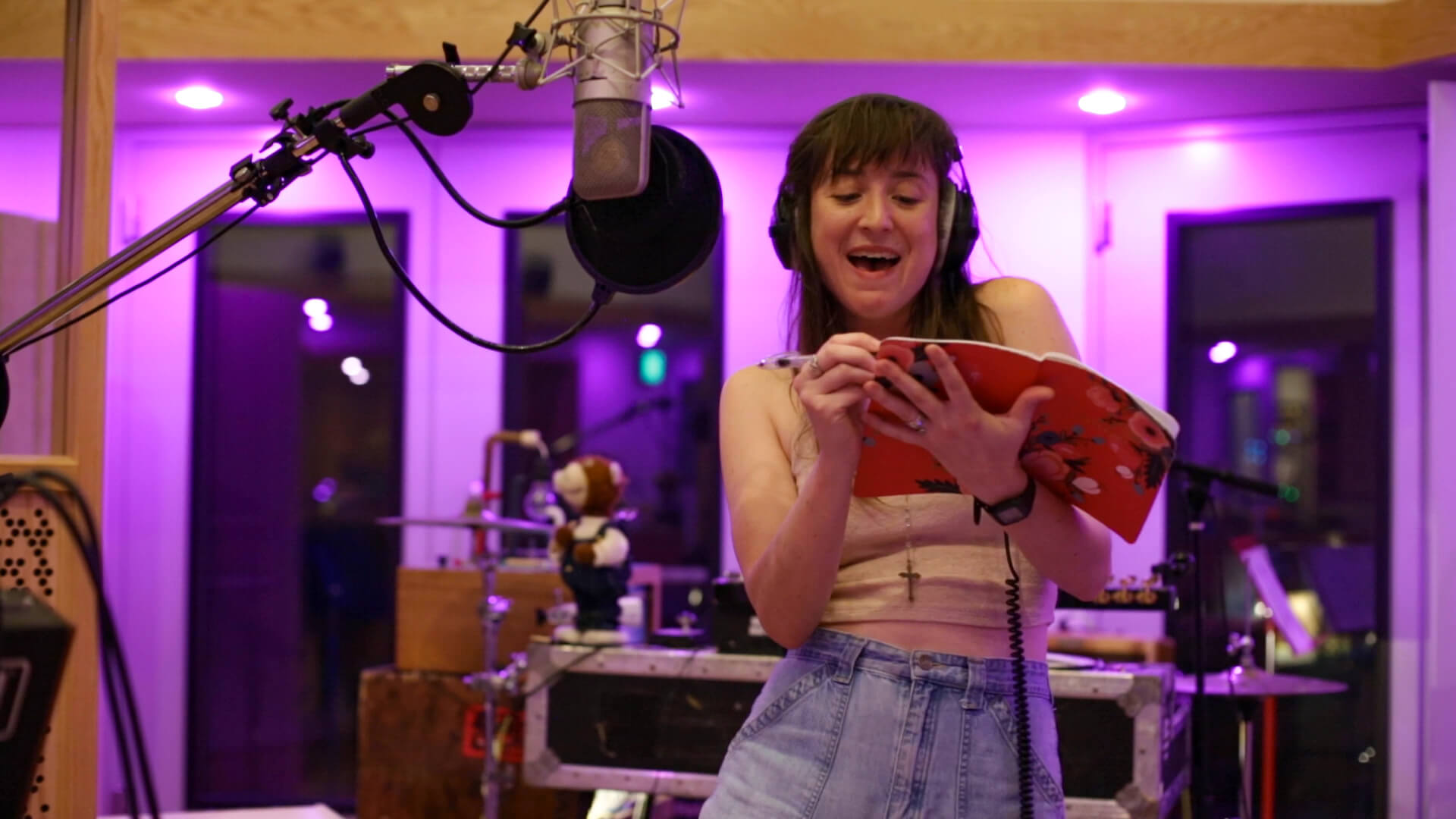 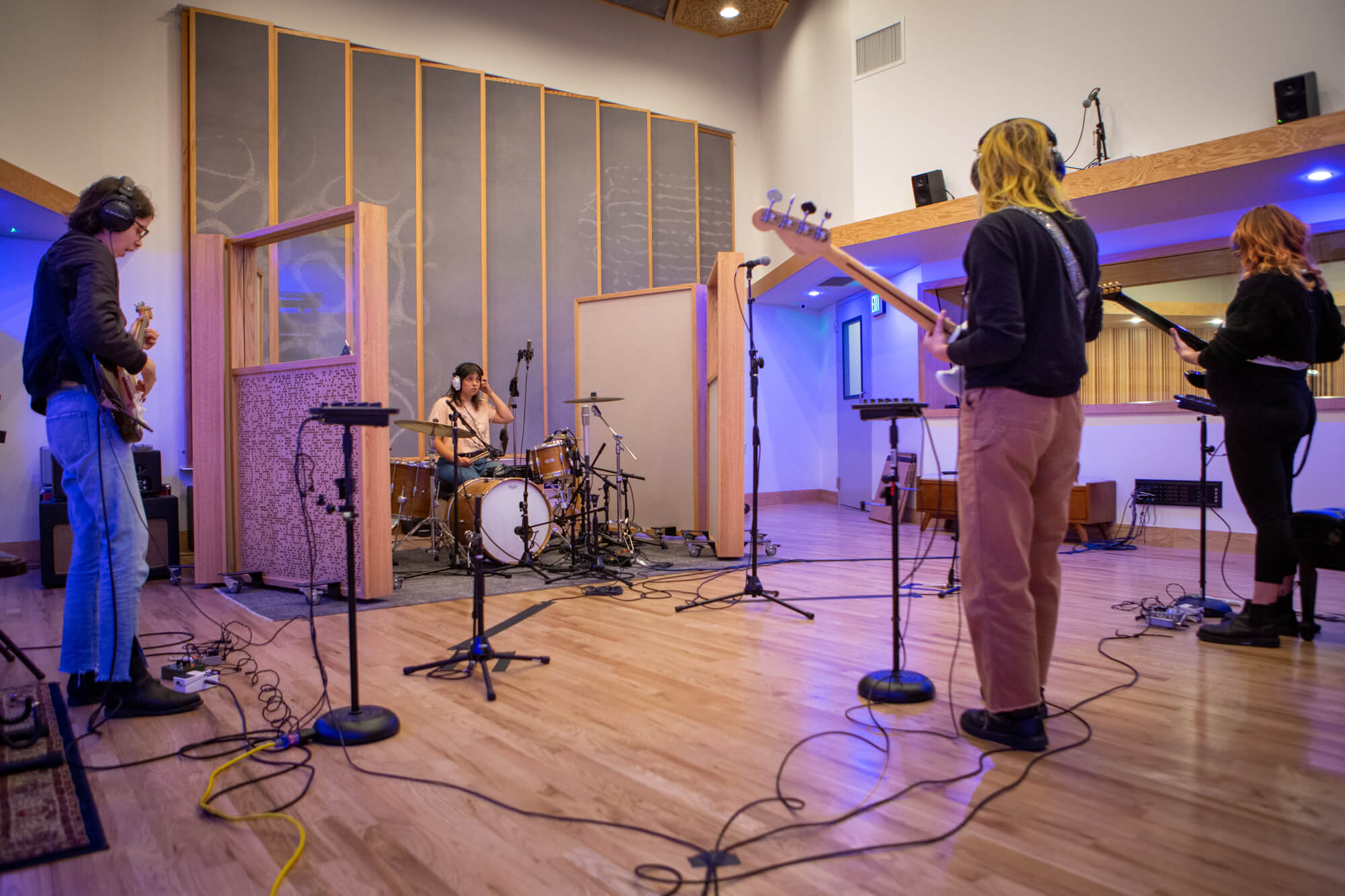 How to Maximize Your Time at the Studio

No matter your genre, there are a few simple steps you can take to maximize your productivity in the studio.
‍
Find the right studio for you
‍First things first, call studios in your area, schedule tours, and talk to their engineers. You are preparing to make a big commitment with your time and money, so make sure you’ve found the right match for you and your project needs. If you don’t vibe with the space you plan to record in there’s a good chance you’ll leave unsatisfied.
‍
Know thy gear
‍Come to the studio with a tonal palette in mind and bring the gear that defines your sound. If  Fender cleans are what you’re after, then make sure the studio you’re working with has that particular kind of amplifier at their disposal or find a way to get one yourself. Similarly, if you’re looking for some killer low end for your hip-hop or electronic productions, then make sure the studio has the hardware synths or plug-ins you need.  Sweat the small stuff! Don’t forget to bring extra picks, strings, and drumsticks. These seemingly small details are easily overlooked, yet contribute in a major way to your tone and comfort in the studio.

‍Be organized and well rehearsed
‍You can never be over prepared. The recording studio is a blank canvas with infinite possibilities. Unfortunately, your time there is limited. The artists who walk in the studio with a game plan are the ones that walk out with finished tracks.
‍
Be well rehearsed and have your arrangements clearly defined before stepping into your session. Try your best  to make demo recordings of your material before hitting the studio. This will help you to discern what you need to practice and get you in the right headspace for your upcoming session.
‍
Commit to as many practice hours as you need to ensure that you feel like you can nail your performances on the first take. Pressure has a way of compounding in the studio. Vocal or instrumental passages that seemed easy at home can prove daunting when your focus drifts toward the clock and away from your performance.
‍
We strongly discourage the practice of using the studio as a writing environment. This is a risky move artistically and the easiest way to burn through your valuable studio time.

Realistic Goals
‍Clients often think they’ll be able to breeze through recording six tracks a day without thinking about how much time goes into each step of the process. We don’t recommend trying to tackle more than two songs a day unless your project is tracking entirely live.
‍
We often suggest separating the recording and mixing process into separate sessions. You can grind it all out from start to finish in one day, but we find that artists make the most informed decisions when they return to their music with rested ears and a fresh cup of coffee.
‍
Communication
‍Communicating effectively with your band and engineer is crucial to your success in the studio. Do your best to cultivate a positive atmosphere in your session and encourage the musicians you are working with. You know you’re on the right track when you can ask bandmates to try another take without hurting their feelings.
Don’t be afraid to ask the engineer for what you need or stress out about expressing concerns about something not sounding right. The engineer wants you to succeed and leave with music you’re proud of and most issues can be addressed with simple solutions.
‍
Time Management and Priorities
‍Tackle the most time demanding and studio specific aspects of your recording project early on in the session. Recording a drum kit or a grand piano can be a difficult or totally impossible task at home, so make a list of what you absolutely need to get done in the time you booked and hold yourself accountable to it. We love to see bands who have done their homework and break out the whiteboard in the studio.
Don’t let yourself get too carried away with gadgets in the studio. Refining the tonal details in your track is best left handled at the end of the session or by setting aside dedicated time for sonic exploration. Tone-quests will always be an appealing distraction, but it’s generally the performance and not the celestial reverb patch that leaves a lasting impression on the listener.
‍
Relax
Remember to relax. You have the incredible opportunity to do what you love and share it with the world. Breathe deep, think about how awesome that is, and put it all into the music.  Pulp was built from the ground up with some of the nicest gear in the world, but none of that matters if you’re feeling anxious about the process. Feel free to contact us with any questions and we’ll make sure that you walk into the studio feeling confident and prepared. 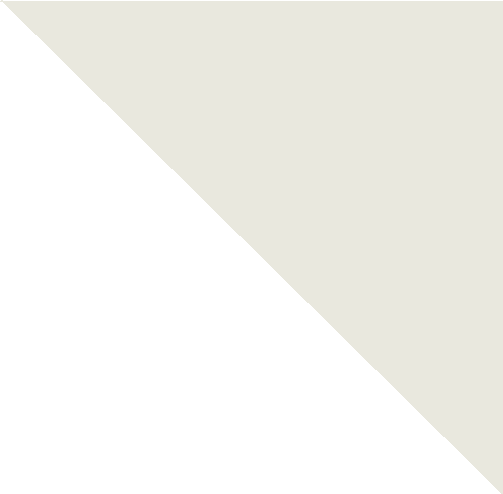